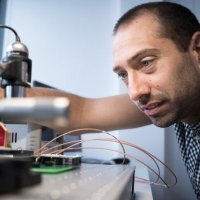 He worked for 7 years as a security expert in the hardware security team of the scientific division of ANSSI (French Cybersecurity Agency) in Paris, France. During these years he created and was responsible for the team lab, worked as penetration tester on a wide range of products, and was technical support for the ANSSI National Certification Center.

He then came back to work as researcher at the LIRMM (laboratory of computer science, robotics and microelectronics of the university of Montpellier), before co-founding NinjaLab.

Victor is also an active academic researcher in the fields of cryptology and hardware security, with publications, keynotes and program committee membership in top conferences like CHES, FDTC and COSADE.